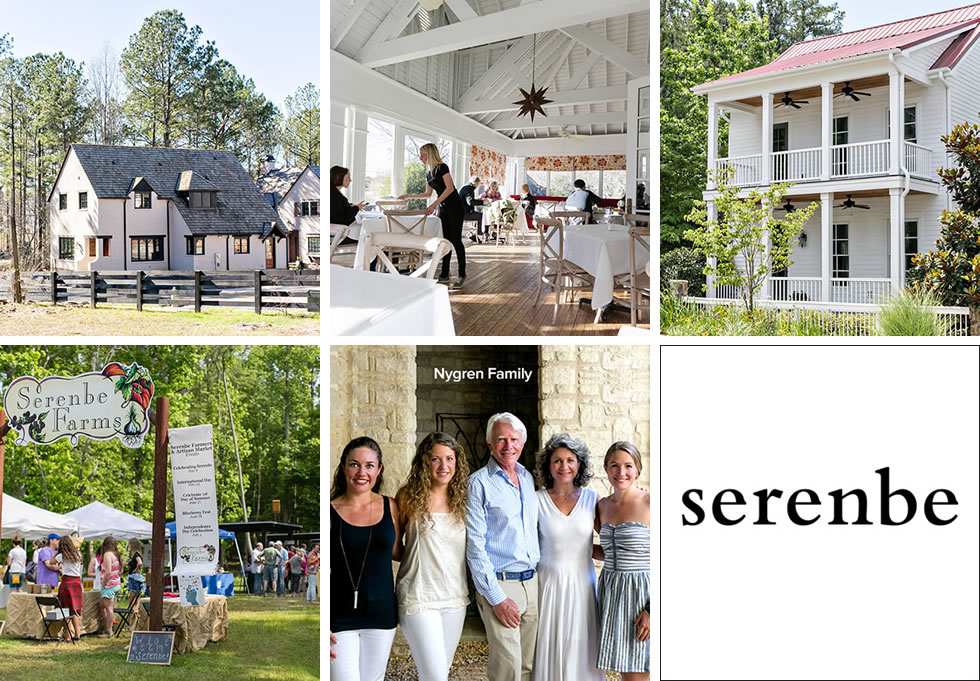 Farm-to-table, an important concept for restaurateurs who know that fresh, local produce is a focus for many of today’s diners, has taken on new meaning in Serenbe. The community/village now has 550 residents of all generations who live amid 1,000 acres just 35 miles from downtown Atlanta. Up to 3,000 residents eventually can be accommodated. This new way of living–inspired by other planned communities but with a healthy living twist–is grabbing attention nationwide.

Only 30 percent of the land can be built on due to the vision of the husband-and-wife developers who started Serenbe more than 10 years ago, which they named in part to play up the importance of serene living, which is how they felt once moving to the countryside in 1991. The remaining 70 percent of the land is set aside for farmland, lakes, animals, and trails, and all is designed to show how fresh country air, food, and overall well-being in healthy homes and activities brings residents closer to nature and connects them more to their community and one another.

Change the world by starting in your own backyard

The idea for Serenbe started when developers Steve and Marie Nygren decided to test living in Georgia’s Chattahoochee Hill area with the Chattahoochee River nearby as a weekend experiment to introduce their three young daughters to Atlanta’s outlying areas and to get away from their busy urban lives that involved running the highly successful Peasant Restaurants company. When the couple found the idea so appealing they didn’t want to leave, they sold the company, bought up 1,000 acres at once to avoid having others encroach on their dream and moved full-time to the area. They then fine-tuned how others would join them in a sustainable setting that would foster the deep sense of community. Marie suggested the name Serenbe for the site’s feeling of serenity, which is how she felt on the land when they bought the original 1905 farmhouse and once they relocated there.

From the start, the master plan included a mix of housing–rentals and for-sale and cottages, townhomes, bigger homes, and work-live units–arranged in four hamlets based on an English village concept and clustered along serpentine paths. Land would be minimally disrupted for passive and active use with denser-style dwellings grouped at the core or the equivalent of a downtown and other homes spread out further and further apart toward the site’s perimeter. Wetlands would be preserved, and 15 miles of trails would wind through and past two natural waterfalls for walking and biking.

To provide a fully habitable setting, there would also be interesting, independently owned shops, recreational activities such as a gym, croquet field, two swimming pools, and bocce ball court, an inn for visitors to stay overnight or to test life at Serenbe, and a host of regularly scheduled activities, from an outdoor theater to culinary workshops, lectures, music, film, and art events. Housing and studio space would be set aside for an artist-in-residence program.

Farming, part of the original inspiration, would come to life with a 25-acre organic-certified farm planted, seasonal farmer’s market opened, CSA for a variety of fresh products, and edible landscaping of blueberry bushes dotting paths and sidewalks and meant to be picked and eaten. A farm "village" would also be organized with a mix of goats, lamas, pigs, rabbits, and chickens, the latter to provide fresh eggs for guests at the Inn. Three restaurants would highlight farm-to-table cuisine. As of now, there is no large grocery store on the premises, but The General Store offers wine, cheese, breads, and extensive takeaway offerings and other larger stores lie only six to ten miles away.

Sustainability would rank high in the construction of homes and buildings through geothermal, solar, Net Zero, and EarthCraft construction techniques and systems. Wastewater would be treated for ornamental irrigation.

But this community is most of all about its residents of multiple generations who may work on site, commute to jobs elsewhere, or be retired. A charter school was built in the early stages for students in grades kindergarten through eighth grade, with a high school a possibility if demand warranted. Last year an area was set aside for those age 55 and older who want to live in age-appropriate one-story apartments or single-family homes. The idea was to encourage them to age in place in a bucolic setting but also be near those in a range of ages rather than just live with their same-age peers in a retirement home.

In January, the community’s Organic House will open in conjunction with Rodale’s Organic Life Magazine to showcase the importance of health and wellness concepts and eco-friendly building and design in Serenbe’s newest Mado neighborhood, named for the Creek Indian word for "life in balance." The EarthCraft-certified home, open for tours through early March, features natural materials and edible and medicinal gardens, several porches, a yoga and meditation studio, saltwater lap pool, and views of preserved woods.

Change artist for others

In addition to developing a great place to live, the Nygrens and their three daughters–Garnie, Kara and Quinn, who are now all involved in the business in different roles, founded Nygren Placemaking to help guide other individuals and businesses interested in pursuing their own similar-style developments elsewhere in the country. "They wanted to share their story about the placemaking of Serenbe in a formalized setting over a few days," says Monica Olsen, the company’s marketing director.

Several organizations already have applauded the Nygrens’ efforts, including the prestigious Urban Land Institute (ULI), which offered kudos for all the sustainability concepts, and EarthCraft, which named it the Development of the Year back in 2004. As the founders say on the site’s website, "The best reason to live here is the life here."

For more information, go to Serenbe.com.