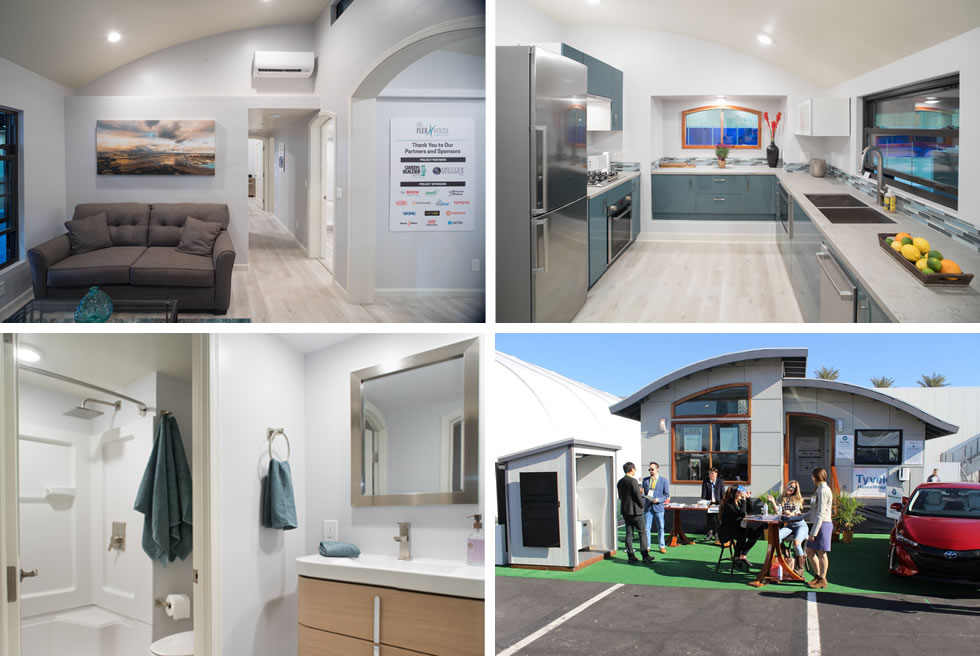 The Consumer Electronics Show, an annual extravaganza to showcase the latest tech innovations from virtual reality to robots and more, was also the site for a slightly more grounded exhibit this year: The Flex House built by Shelter Dynamics and Green Builder Media. Instead of showing off the coolest tech devices in a vacuum, the Flex House, a prefabricated house with smart house features, net-zero energy efficiency and solar power.

The modular house, viewed by most of the more than 180,000 attendees at CES, wasn’t one of the tiny house models that fascinate so many people. The Flex House, with about 760 square feet of living space, is meant to accommodate young families, professionals, empty nesters, roommates and people who want to age-in-place.

For example, the Flex House included an inverter from Tabuchi Electric, which integrates with upgradeable battery storage and solar panels from Jinko to create its own power plant. The Tabuchi system automatically switches to battery power during an electrical outage. The combined system from Tabuchi and Jinko were used to keep battery-operated landscaping tools from Greenworks in operation during the CES show.

In addition to the tech features showcased by the Flex House, the prefab home showcases smart design. The house has a curved roofline that is echoed inside by arched doorways. Built-in seating and storage add to the home’s efficient use of space.

The house has a master bedroom, a full bathroom, a second bedroom or office, two living areas, a full kitchen and a niche that can be used for an office or other function.

For security, the house has a keyless entry system that can be programmed with multiple passcodes, a Ring video doorbell with a solar-powered camera. The kitchen includes compact, energy-efficient, Internet-connected appliances such as a three-drawer dishwasher.

The Flex House, more than just a pretty cool exhibit, is anticipated to be available this summer at a cost of $85,000 to $100,000 depending on the installed fixtures. Buyers would also need to pay for the land on which the modular house would be completed.

Upon entry, you’ll find two living areas: a main living room to the left, and a nook to the right, which leads to a bonus "niche" space before you get to the kitchen. In the kitchen, two windows bring in light, while 24’’ Bosch appliances make the most of the space. All the cabinets in the model home are from Ikea.