As a homeowner, all those tasks your landlord used to do—and your parents did before them—are now on your shoulders. You’ve either got to figure out how to do them yourself or pay someone else to do them. Either way, it would help if you knew how to do a few things around the house. But do you?

The truth is, many homeowners don’t have a clue about how to fix household issues themselves, even if it’s something as simple as draining a water heater or restoring power after blowing a fuse. If you don’t know your way around a toolbox, well, at least you’re not alone.

HomeAdvisor recently surveyed 2,100 Americans to find out how handy they are when it comes to things around the house and got the following answers. Click here to view graphs of the HomeAdvisor survey results.

How Handy Are Americans?

Americans consider themselves handy. Of those they surveyed, 19% reported that they were extremely handy. On average, Americans gave themselves a 3.7 out of 5 handiness rating, with men (3.8) considering themselves to be slightly handier than women (3.6).

Most respondents (43%) picked up their home improvement knowledge from their parents. Their partners were a distant second at 18%, followed by the internet at 16%. Others looked for help elsewhere, including how-to books, trial, and error and even their first boss.

But even though most Americans trusted their parents to show them the ropes, they tend to get their home improvement inspiration elsewhere. More than three in four turns to social media and 82% even said they were satisfied with the result of a project they tried after seeing it on social media. In our survey, 85% said they enjoy home improvement shows on TV.

Even when Americans don’t consider themselves handy, it doesn’t stop them from trying and succeeding: 85% said they enjoy doing home improvement projects, and more than one in four have never had to abandon a project or ask for professional help. Moreover, nine in 10 say they’re comfortable in-home improvement stores. 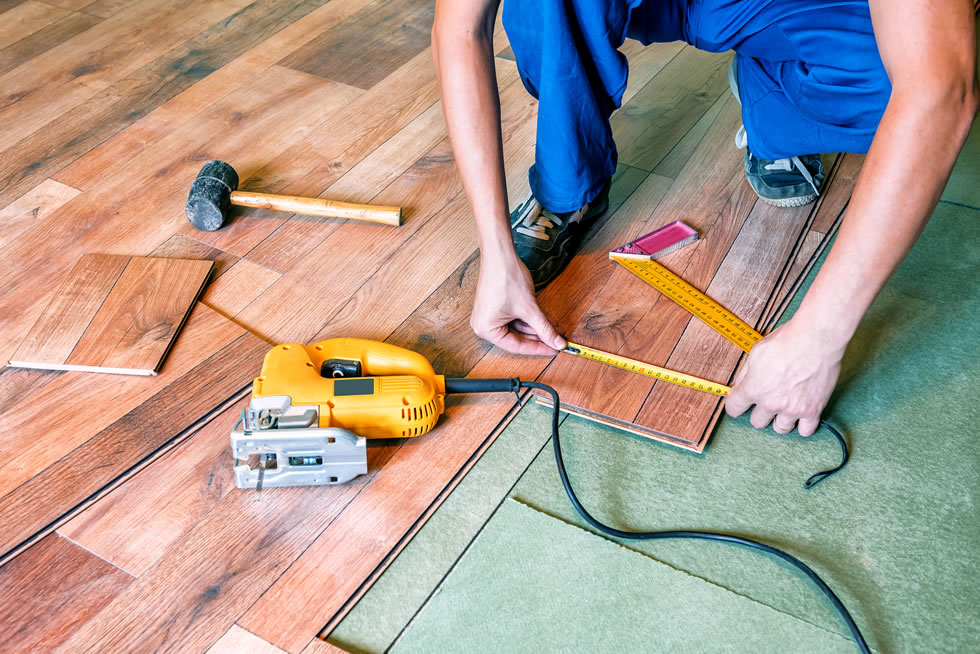 Do People See Home Projects Through?

Despite the confidence level of our respondents, they were willing to admit there were times when DIY tasks got the better of them. In fact, nearly three in four said they’ve had to either abandon a project or call in a local handyperson.

Men are more likely to throw in the towel than women (77% vs. 68%, respectively). Millennials were the most likely to give up at 77%, while baby boomers were least likely at 63%.

What Projects Are Americans Most Comfortable Completing?

People are most likely to unclog a toilet or drain or build a piece of furniture themselves, according to our results. However, they’re likely to hand off projects that require a bit more work, like mowing the lawn or mounting a TV on the wall. Respondents were likely to leave the more difficult jobs to professionals: installing wood floors, replacing an entire toilet, and retiling a shower.

Changing a lightbulb topped the list of projects people in our survey most often said they’d succeeded in doing on their own.

Other common success stories were:

Projects people are most likely to try again including hanging a picture or piece of art, hanging curtains, using a pressure washer and steam cleaning a carpet.

And since you need tools to do many of these projects, here are the ones Americans are most likely to have in their toolkits. Pretty much the basics.

What Home Projects Do People Avoid?

Some of the simplest tasks wind up being a sore spot for all ages. Nearly two in five millennials (35%) said they have never changed a lightbulb, and 24% of Gen Z said they wouldn’t even try to change one again.

There are plenty of ways to find a stud in the wall, but nearly one in five Gen Xers said they wouldn’t attempt to do it again.

A lot of baby boomers must have breathed a sigh of relief when they saw ads that boasted “no assembly required” because one in five of them won’t try to build an “assembly-required” piece of furniture again.

But most of the projects people are least likely to do successfully on their own are fairly involved and labor-intensive: replacing an entire toilet, retiling a shower, removing a popcorn ceiling, draining a water heater, and installing wood floors.

Projects they’re least likely to try again, however, are less complex: changing a lightbulb, finding a stud, unclogging a toilet, changing the batteries in a smoke alarm, or replacing the air filter on an HVAC unit. Better to leave those to the pros next time.

Fortunately, there are professionals out there who are ready and willing to do various jobs, whether you’re talking about more involved work like updating your home’s electrical system or more general handyperson services.

But our survey showed that the American do-it-yourself confidence is alive and well, even if we do occasionally admit defeat and find someone else to fix that leaky pipe.